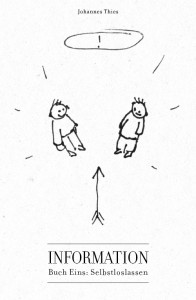 Selbstloslassen is the very first step into this mini-series on the most popular drugs of our times: information, speed & confusion, friends DIY-kicks, telepathy and the NOW.
Book One is the work of a desperately hilarious mind in the digital age, trying his best in self-recognition and destruction, to then carefully grope with the keys to a new Beat Generation in the wee years of the twenty-first century.
On his quest for reliable information, this non-hero meets the forefront of what they call Metamodernism, people like Dr. J. Rimmberger, the Earthman/ Spaceman, and of course the Cityfox. Their equally lost and found little ways will readily merge into a single lane, commonly known as the Piss Drain of Berlin Fucking Kreuzberg.

Buch Eins is something like an inkling or a hunch of what’s coming, a new wave of Hippies maybe, the potential of a post-digital counter culture, rather not, self-determination and its corresponding problems within the collective global consciousness.
In part two of these notes from the underground, the reader gets to see through the underbrush of capital city with its manifold contradictions. It’s a small world, somewhere between the Visionary’s Club and the Color TV. The information of Berlin is immediate and mostly to be found on the streets, along the Mayday Rally, at Berghain, of course, even in Mitte, and totally free of friendly surveillance. Spontaneous, crude, blunt.
The age of metamodernism is free of contradictions, presumably, so all of its contradictions are celebrated within the anti-social network of these here characters, leading up to a total fusion on all levels thinkable, naturally and self-sustained. (ORDER HERE NOW)