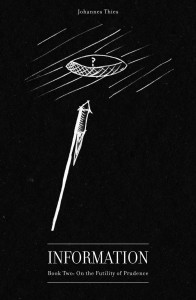 On the Futility of Prudence is the second document on the truth and delusion of metamodern information. Book Two is an American book, collected and written down on the hippie trails of new and ancient times. Once again we are ploughing through a semi-fictional text and visiting the strongholds of American counterculture, places like Boulder Colorado or Santa Cruz California and Black Rock City Nevada.

The author takes us along his stream of Dharma on the American Road, going all the way to the core of desert utopia at Burning Man and close enough to the epicenters of Californication worldwide: San Francisco, Los Angeles, not to forget Big Sur.
Next is the Fall of 2011 and the nationwide movement of Occupy Wall Street, adding a more serious and political note to his Grand Tour. We get to sneak into all the Occupy camps between Denver and Toronto and the head-spinning rumors of the post-apocalyptic renaissance of Detroit Motor City.
(JETZT HIER BESTELLEN)