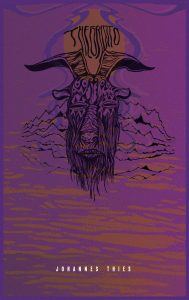 Reason enough to delve a bit deeper into the midst of this romantic America unseen, beyond the Great Divide, around the Friendliest Town Around, into the golden triangle of hippies, a fabulous new Shangri-La, where peaches thrive and on the radio the sweet day Freak show is on, right now.
A simple little farm in the high desert of Colorado, on the mystical mesa, the good and simple life, along with the chickens and ducks and all the other animals, smoothies and yoga to wake up, hugs to the night. One Best Day Ever after another. Be careful, if everything is exactly as you would like it, if everything is so easy and groovy, as it is known only from the hippie stories of old days, when the mothers already rolling the joints on the go. Or, to stay with the new Nobel Laureate in Literature, Bob Dylan, whose words are as precise as they are to hit the spirit of the new millennium: they stone you and then they say good luck!

The Grotto is a bilingual, but mostly American text, everything else would go past the heart of the matter. Trimming weed in Colorado, written down as experienced. Otherwise you could barely grasp the veiled culture of this idiosyncratic agriculture in writing, it takes the sticky slang of the All-American Hippie Farmers, the Mystic Man or even the Groot.
The blur of this fabulous world is not only inevitable but also charming, as we are still moving in the post-factional sphere of the so-called Information Age. The only thing that is clear is that nothing is clear and nobody can tell with certainty where the journey is going next. Nobody would know that better than the Groot, an old-school rambling man, obscure, unkempt, and paid out in five-dollar bills.

The Grotto plays in and with this fabulous world of Turtle Island, the fantasies and delusions of romantic America, this image in eternal change, always so good that it really can not really be. Traditionally written down in the stream of expanded consciousness, this eclectic mix of entertainment and information, Zen and robber pistols, the sound of the New World or the wind of the old days. Of course, the sheriff plays a role, as does the Anagram of God, a green gate that has no keys, hot springs on the edge of the American street, the work of the devil that never comes easy, tireless scapegoats, the colorful shimmer the real estate bubble, interesting times, a curse and a blessing.