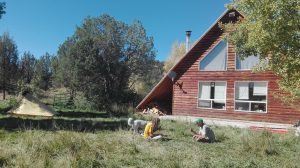 Last day of September and I start seeing the California People in the Colorado People. Like as if the situations are either from some other time, past or future, or timeless, prototypical déjá-vus, but then again, we are of course smoking A LOT OF weed every day in a good number of days now.

I wonder if those stoners like us ever get anything big actually going, such as pulling off a five week rally for a random guy they might not necessarily be wanting to do business with to potentially sit on the county’s board of commissioners.
So, this whole story might or might not receive a dash of political flavor. There’s a bunch of elections coming up and the green farmers of Hippie Delta U.S.A. feel a growing urge to have their interests represented at the appropriate level now. Provided always that they actually do know what they want outside of making a lot of easy money.

Making my way back to the cats in the press shop thru tender is the mountain night. I mean just to get things straight. All those Boys ever really want is to press some glistening fancy buttons on heavy machinery all the while getting high as fuck. Now the sheriff’s on their tail though and something’s got to happen. They must have made shitloads of money, paying eighty grand in trimmers alone, but that was last year, and the careless splendor of those cotton candy days is still lost and forever probably.
Not even two weeks since I first got here, and yet I’m being sucked right into this giant hazy vortex, sitting down at the inauguration meeting of what might turn into a political landslide or at least it should be fun to watch. The joints are huge and so are the pizzas they had coming. Classic Americana, one is tempted to say, and straight to the ice cream it is, together with a serious series of high-powered dabs, and that’s how they roll out here pretty much.

(Taken from “The Grotto“)